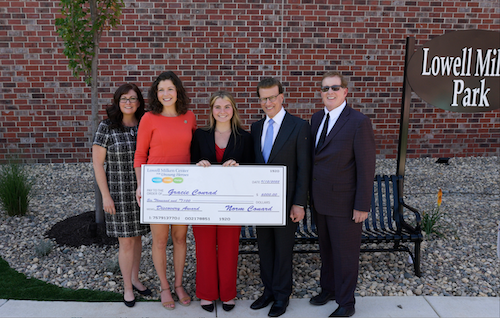 FORT SCOTT, Kansas, (September 12, 2022) – For the 2021-22 Discovery Award competition, the Lowell Milken Center for Unsung Heroes (LMC) in Fort Scott has awarded $15,500 in cash prizes to elementary, middle and high school students. This international competition inspires students to develop primary and secondary research projects which share the stories of Unsung Heroes from history whose accomplishments remain largely unknown to the public.

During a celebration for LMC’s 15th Anniversary and the Grand Opening of its new park, Nebraska’s Loup County High School 11th grader Gracie Conrad was announced as the $6,000 Grand Prize winner. Conrad’s extensive research led to her compelling entry, Betty Goudsmit-Oudkerk: Teenager, Resistance Member, Unsung Hero. At 18 years old, Goudsmit-Oudkerk worked at the crèche (Dutch for “daycare”), which became part of the Jewish deportation apparatus during the Holocaust. Having built relationships with the children, Goudsmit-Oudkerk was asked to join a group of workers who helped smuggle more than 600 children out of the crèche. Because of her heroic acts, Conrad notes, “hundreds of people are alive today.” (Teacher Megan Helberg)

According to LMC Chief Executive Officer Norm Conard, “Conrad’s project is exceptional in every way. The Betty Goudsmit-Oudkerk documentary shows a brilliant quality of work, telling of the unique and inspirational bravery of the Unsung Hero. We look forward to sharing this story in an exhibit for our Hall of Unsung Heroes.”

LMC’s Discovery Award provides a unique opportunity for U.S. and international students in grades 4 through 12 to research primary sources and use their talents to develop projects that showcase the power of one person to make positive change in the world. The actions which define the Unsung Hero’s legacy as a role model must have occurred a minimum of 20 years ago, and the project must demonstrate the impact made over time as a result of those actions. Students must create a documentary, performance or website featuring an Unsung Hero, accompanied by an annotated bibliography and process paper. The prize money can be spent at students’ discretion.