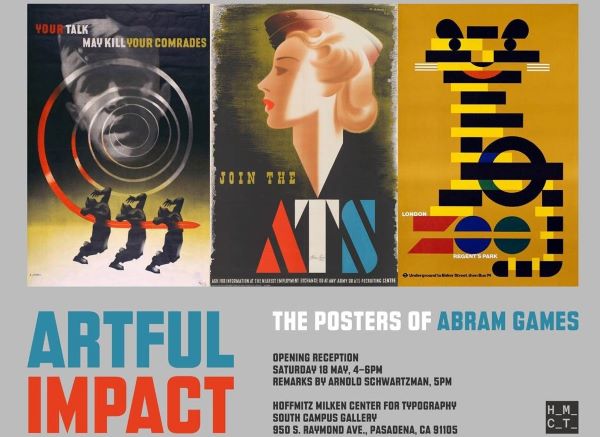 PASADENA, CA (May 6, 2019) The Hoffmitz Milken Center for Typography (HMCT) presents Artful Impact: The Posters of Abram Games. This comprehensive collection, on exhibit in the United States for the first time, will open with a reception on Saturday, May 18 from 4–6 PM in the South Campus Gallery. Acclaimed designer, film director, and protégé of Games, Arnold Schwartzman, will be sharing remarks at 5 PM. Open to the public and free of charge, the exhibition runs through July 28, 2019.

British designer Abram Games (1914-1996) holds an important place in the legacy of twentieth-century graphic design. For over five decades he interpreted the social, political, and commercial pulse of his country by absorbing the influences around him and referencing them in his works. As a graphic thinker and social observer, Games created designs that commanded attention and sparked reactions. His works were often direct and deceptively simple: striking images joined compelling slogans rendered mostly in hand-drawn display lettering, to capture the eye, the mind, and the heart. He followed tradition by using familiar objects, then embraced cutting-edge modernism by rendering them as simplified shapes or bold silhouettes that sometimes doubled as playful visual puns.

As the official designer of war posters for Britain during World War II, Games informed the citizenry as he implored them to take action on the home front. On display are several of his most celebrated war posters, including Join the ATS—aka the “Blond Bombshell,” a recruiting poster eventually withdrawn from circulation after heated Parliamentary debate. His later commercial poster work is represented by The Guinness ‘G,’ along with six of his British Overseas Airways Corporation (BOAC) posters, and a collection of designs produced for London Transport and The Financial Times. The exhibition includes several of Games’s postage stamp designs, covers for Penguin Books, and a documentary on his life and work, Maximum Meaning, Minimum Means.

On Tuesday, May 21 from 7–9 PM the HMCT will present In Conversation: Artful Impact, featuring speakers Naomi Games, daughter of Abram Games, keeper of his estate and author of several books on his work; David Mihaly, Jay T. Last Curator of Graphic Arts and Social History at The Huntington Library; and Professor Gloria Kondrup, Executive Director, HMCT. A reception and an informal tour of Artful Impact with Naomi Games will follow.

Artful Impact: The Posters of Abram Games is organized by the Hoffmitz Milken Center for Typography and made possible by the generous support of the Lowell Milken Family Foundation.