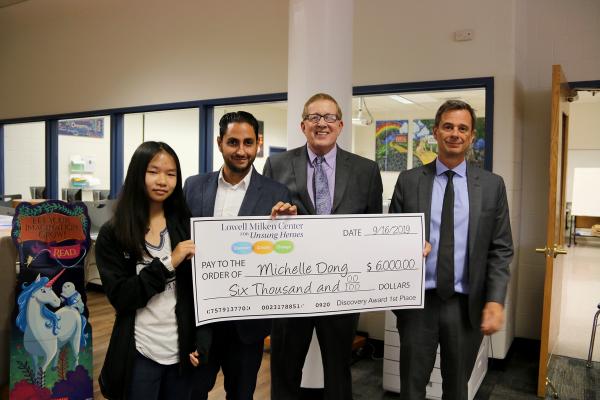 The winning project, “Caroline Ferriday and the Ravensbruck Lapins,” a website created by Dong, an eighth grader from Jericho Middle School in Jericho, New York, reveals the incredible story of philanthropist, Caroline Ferriday. In 1958, Caroline rallied American support to bring a group of Polish survivors from the Ravensbruck Concentration Camp to America for rehabilitation. The Nazis had used these women as test subjects to perform inhumane medical experiments, leaving them crippled and causing them to hop around the camp. The Nazis began referring to the women as “lapins” or rabbits because of this. Caroline’s efforts not only uncovered these tragedies but she also helped to obtain financial compensation for the Lapins from the West German Government.

Norm Conard, LMC’s Executive Director, presented Michelle with the prize at a festive assembly at Jericho Middle School. “Michelle told Caroline Ferriday’s fascinating story by using in-depth research skills and multi-media resources and presented it in a very thorough and organized website,” said Conard. “Each Discovery Award recipient uncovered an Unsung Hero whose contributions deserve to be recognized. We congratulate these wonderful students and their teachers.” Michelle was advised by her social studies teacher, Konstantine Kovoros.

In all, LMC awarded six prizes to elementary, middle school and high school students in the U.S. and abroad. In addition to Ferriday, the Unsung Heroes uncovered by the winners’ research include war heroes, a missionary, and civil rights advocates.

The $3,000 Second Place Prize goes to Priscilla Sanchez, Jacqueline Vega, Kevin Jackoby, and Charles Brooks from New Technology High School in Napa, California. Their project, “Eileen Nearne: An Unsung Hero,” is a documentary about 23 year-old Eileen, a S.O.E. British Intelligence Officer who managed to transmit 105 messages, revealing Germany’s plans back to Great Britain, before being captured. Eileen’s work as a spy took a lot of courage, as she endured many hardships and poor treatment by her male counterparts in the S.O.E. Her bravery, however, pushed her to continue her heroic activism. The students involved in this project incorporated a tremendous amount of research and used excellent multi-media skills to develop this documentary. They were advised by Nancy Hale, who teaches American Literature and Film at New Technology High School.

The Outstanding International Project came from 4thgraders at Garapan Elementary School in the Commonwealth of the Northern Mariana Islands, Saipan. Edward Becina, Aiden Camacho, Cody Gamboa, Jed Gilboy, and Shane Manicad earned $1,000 for their documentary, “Guy Gabaldon: The Pied Piper of Saipan”. Guy Gabaldon was a U.S. soldier stationed in Saipan during World War II. He used his ability to speak Japanese to help U.S. capture Japanese soldiers, by convincing them that they were surrounded. He also used his linguistic skills to stop many Japanese people from jumping off Bonzai Cliff. His actions led to the capture of 1500 Japanese soldiers and saved countless lives. The students gathered information from primary resources and used excellent multimedia skills to create this documentary. They were advised by their 4thgrade teacher and LMC Fellow, Peter Loken.

Project: “William D. Matthews: A Cure for Rebellion,” a documentary about African-American Hero, abolitionist, and Civil War veteran who assisted African-Americans escaping slavery using the Underground Railroad. He also was the first African-American officer in the Civil War and helped fight for equality after his service in the military.

Project: “The One That Stayed,” a documentary, tells the story of American missionary, Carl Wilkens, who during the 1994 genocide of 70% of the Tutsi population in Rwanda, stayed behind in an effort to protect the people he was there to serve. Among his many humanitarian acts, he managed to evacuate 400 people from an orphanage before it was massacred by the Hutus.

Project: “Standing Up Against Discrimination,” a website explaining how Dion Diamond, who at a very young age, protested for equal rights for African-Americans during the 1960’s and inspired others to do the same.

LMC’s Discovery Award provides U.S. and international students in grades 4 through 12 a unique opportunity to use their creative talents to develop projects that feature Unsung Heroes from history, demonstrating one person’s power to make positive change in the world. Projects can take the form of documentary/multimedia, performance, or website. Projects require robust research, an annotated bibliography and a process paper. The Unsung Heroes’ stories must show potential for life beyond the development of the project and an ability to inspire students and others to take sustainable actions that carry out the legacies of their subjects.