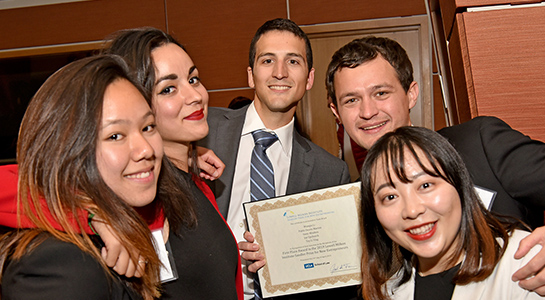 A student-run startup that addresses the costly and common habit of teeth grinding and another that uses artificial intelligence to assist corporate human resources managers in evaluating employees were the big winners of the $100,000 Lowell Milken Institute-Sandler Prize for New Entrepreneurs.

Drawing nearly 200 students, faculty and guests, the final round of the fourth-annual competition was held April 16 at UCLA's California NanoSystems Institute. Armed with business plans that they devised over months of preparation, six teams of students from across campus vied for seed funding to kick off their innovative companies in a Shark Tank-style battle before a panel of judges.

With a total of $100,000 at stake, the LMI-Sandler Prize is the largest entrepreneurship competition at any law school in the United States. It is the brainchild of Lowell Milken and Richard Sandler, members of the UCLA Law Class of 1973, who established the competition at the law school's Lowell Milken Institute for Business Law and Policy in 2016. The aim is to foster an atmosphere where UCLA students can bring their ideas to market and where UCLA Law students can gain experience building a company from the ground up.

In the event's fourth year, 26 student teams submitted plans, which judges narrowed to six for the final round.

First place and $70,000 went to BruxA. Dreamed up by UCLA Anderson School of Management student Pablo Osorio Martini, the company offers a state-of-the-art mouth guard for the substantial number of people who grind their teeth in their sleep. The company aims to provide an affordable service similar to the internet-based personal care brand Dollar Shave Club, alleviating the expense, anxiety and pain that stem from teeth grinding and its traditional dental remedies.

The $30,000 prize for second place went to EvalueMe, which provides corporate human resources managers with artificial intelligence-driven software that enables them to reduce bias and the appearance of bias in employee evaluations. UCLA Anderson student Shirin Nikaein devised the business with an eye on the estimated $500 billion that companies lose each year because of employee turnover due to bias.

Nikaein says that the LMI-Sandler Prize's seed funding is about "more than just the money. It can help with recruiting because it gives us additional validation. It can help accelerate executing our go-to-market strategy. It can also allow us to travel to potential customers, because meeting face-to-face really helps with the sales process."

Her teammates included undergraduate Hunter Carlisle and law students Nathan Cox '19, who met Nikaein at a competition gathering in October 2018, and Barbara Wong '20, who previously worked in for a human resources software company and was eager to "help improve diversity and inclusion in the workplace, especially as a woman who worked in a male-dominated industry."

Team member Iness Mouhou, an attorney from France who is earning her LL.M. degree at UCLA Law, said that the competition offered "a great occasion not only to practice but also to see how a company, a startup, actually works from the inside. It required a lot of teamwork, and we met every week, sharing and brainstorming. With all of us coming from different countries and backgrounds, we all learned a lot from each other, and each of us brought and shared our knowledge with the others."

Joel Feuer, executive director of the Lowell Milken Institute, oversaw the months-long competition, served as the evening's emcee and will continue to advise the winners.

The final-round event was introduced by Jennifer Mnookin, dean of UCLA Law, who highlighted the opportunities that UCLA and UCLA Law create in fostering entrepreneurship and innovation.

An additional prize of $1,000 went to audience-favorite award winner Neighborhood Works, which constructs affordable housing for homeless and low-income people in Los Angeles. Other finalists included U-Defi, an anti-aging skincare product; Sweetpea, a company that rents baby gear to parents; and Edenos, which connects communities of disease patients with doctors, clinical trials and each other.

This release originally appeared on the UCLA Law Newsroom website.